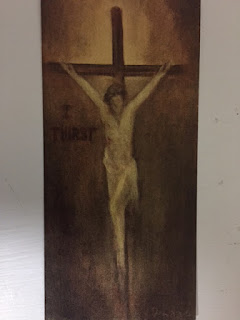 This painting in my office by my mother, Jean Dortch, reminds me to go to Jesus, to quench His thirst for us to visit Him, to take time in the Chapel, to spend time with others, to care for those who cannot care for themselves. His Mother, our Mother, heard him speak these words from the cross and she brings us, day after day, to those in need, whether in our own families or in our workplace or as we walk down the street. He thirsts for us to act. Show Mercy.
I am once again blessed to be in a book group reading and participating in the "33 Days to Morning Glory" in Preparation for Marian Consecration by Fr. Michael Gaitley. In it he shares Mother Teresa's letters to her congregation, one from March 25th on "I thirst":
...(Our Lady) was the first person to hear Jesus' cry "I Thirst" with St. John, and I am sure Mary Magdalen. Because Our Lady was there on Calvary, she knows how real, how deep is His longing for you and for the poor. Do we know? Do we feel as she? Ask her to teach... Her role is to bring you face to face, as John and Magdalen, with the love in the Heart of Jesus crucified. Before it was Our Lady pleading with Mother, now it is Mother in her name pleading with you - "listen to Jesus' thirst." 33 Days to Morning Glory

This image also reminds me of Mother Teresa's Humility List:

1. Speak as little as possible about yourself.
2. Keep busy with your own affairs and not those of others.
3. Avoid curiosity.
4. Do not interfere in the affairs of others.
5. Accept small irritations with good humor.
6. Do not dwell on the faults of others.
7. Accept censures even if unmerited.
8. Give in to the will of others.
9. Accept insults and injuries.
10. Accept contempt, being forgotten and disregarded.
11. Be courteous and delicate even when provoked by someone.
12. Do not seek to be admired and loved.
13. Do not protect yourself behind your own dignity.
14. Give in, in discussions, even when you are right.
15. Choose always the more difficult task.

"Genuine sacred art draws man to adoration, to prayer, and to the love of God, Creator and Savior, the Holy One and Sanctifier." —Catechism of the Catholic Church, 2502

"Lord, as we look upon the beautiful images of your Son, of Our Lady, and of the saints, help us to see beyond the images and receive the messages you speak through them. Help us to take the time to receive the gifts you promise." Amazing Graces
Posted by Julie Cragon at 6:58 AM No comments:

The Gospel reading today reminds me of the use of oils in the church. Now of course I realize that the sinful woman used ointment to anoint Jesus' feet, "Bringing an alabaster flask of ointment, she stood behind him at his feet weeping and began to bathe his feet with her tears," but it just brought to my mind the story of Philomena and the use of oil.

"In the fifth century began the custom of pouring oil over the relics of saints and collecting it in vials and cloths. This oil was used in praying to the saint for people in need of spiritual and physical healing. The faithful also use oil that is blessed in honor of a saint.
In the nineteenth century, the body of St. Philomena was enshrined in Mugnano del Cardinale, Italy. As was customary, a lamp of oil was left to burn in honor of the saint. A woman from the town came to visit the shrine and, before leaving, dipped her fingers in the oil and anointed the eyes of her blind child. The child’s sight was restored. Today pilgrims bring oil to the Sanctuary of St. Philomena, and the bishop blesses it for distribution all over the world. The sanctuary offers very specific instructions that the oil is to be used “within the prayerful intention of the Church as a sign of divine blessing and an expression of faith.”
The Church offers careful instruction on the use of oils.  A 1997 directive, “On Certain Questions Regarding the Collaboration of the Non-Ordained Faithful in the Sacred Ministry of Priest,” formally issued by the Congregation for Clergy and cosigned by several Vatican congregations and councils, states:
In using sacramentals, the non-ordained faithful should ensure that these are in no way regarded as sacraments whose administration is proper and exclusive to the Bishop and to the priest. Since they are not priests, in no instance may the non-ordained perform anointings either with the Oil of the Sick or any other oil."


A gentleman comes into our bookstore often and purchases holy cards and pamphlets and Bibles to hand out to anyone interested or anyone in need. He’d tell you we are all in need.

One Saturday, he was quite persistent that I order Philomena oil for him to give to some people in need of a special blessing. I really did not want to deal with it, but I went to the office and placed an order from the shrine in Italy. The oil came in a few weeks later. I got it to the gentleman, and all was well.

In the meantime, a friend from the old neighborhood had a nephew in great need. At nine years of age, he had had what doctors believed was a stroke. Immediately, schedules were coordinated online for round-the-clock prayer before the Blessed Sacrament for this boy. I was simply asked to print prayer cards so that all could pray the same intercessory healing prayer. People in different states were praying together for a life.

The next time the gentleman was in the store, I shared with him the story of this young boy and all the amazing “God incidences” that had occurred surrounding his family. He said, “You should send them some oil from St. Philomena.” I said, “No, no, it’s OK.” But he insisted.

I am not like this. Yes, I will pray for this child. I will spend time before the tabernacle. But don’t make me send this oil. So I went about my business and forgot about the oil.

When I got home, the update to the young boy’s condition was on my computer. I pulled it up and read about him, as well as his family. His sister’s name was Philomena! I blinked and stared at the screen. Philomena.

The following Saturday, the gentleman came into the store, and I told him what had happened. He reached in his pocket and pulled out his last full bottle of oil. I took it to the young boy’s aunt, who planned to see him in the next couple of days.

I am told that many, many stories of God’s presence surround this boy and his family. What a witness they are to those they meet!  Pure grace.
Amazing Graces: The Blessings of Sacramentals

Posted by Julie Cragon at 11:00 AM No comments:

Our Lady of Sorrows 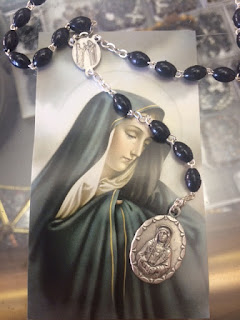 "A chaplet is prayed on a set of beads, much like a rosary. The prayers said on the beads are prayers of devotion to Jesus, Mary, or one of the saints. We can pray a chaplet for a specific need or simply to honor an aspect of the life of a holy one. The beads help us in our meditation and remind us to constantly pray to Jesus and Mary and the other holy men and women in heaven". Amazing Graces: The Blessings of Sacramentals
In honor of Our Lady's Feast Day, consider praying the Chaplet of Seven Sorrows.


As for the Chaplet of the Seven Sorrows, it reminds us that Mary plays a key role in our Redemption and that she suffered along with her Son Jesus to save us. It is prayed using a special rosary comprised of seven "decades" containing seven beads each.
Here is how the Chaplet of Seven Sorrows is prayed:
Each group of seven is begun with an Our Father, as in the regular Rosary. Some people start with an Act of Contrition, since the devotion has a penitential aspect. Also like the regular Rosary, the groups of seven Hail Marys are an occasion for meditation on "Mysteries" — in this case, the Seven Sorrows of Mary, listed below:

The Prophecy of Simeon
Reading: Luke 2:25-35.
When Mary and Joseph present the infant Jesus in the temple, Simeon predicts that a "sword" (of sorrow) will pierce Mary's soul.

The flight into Egypt
Reading: Matthew 2:13-15.
When King Herod orders the death of all male children age two or younger, Mary and Joseph flee to Egypt with the infant Jesus.

The Child Jesus Lost in the Temple
Reading: Luke 2: 41-50.
Mary and Joseph search for the child Jesus for three days, finding Him at last — after agonizing sorrow — in the temple.

Mary meets Jesus carrying the cross
Reading: Luke 23: 27-29.
As Jesus makes His way to Calvary, condemned to crucifixion, He meets His mother, Mary. He is bruised, derided, cursed and defiled and her sorrow is absolute as Jesus drags His own cross up the hill of His crucifixion.

Mary at the foot of the cross
Reading: John 19: 25-30.
Mary stands near her dying Son unable to minister to him as He cries "I thirst." She hears Him promise heaven to a thief and forgive His enemies. His last words, "Behold your mother," charge us to look on Mary as our mother.

Mary receives the body of Jesus
Reading: Psalm 130.
Jesus is taken down from the cross and His body is placed in Mary's arms. The passion and death are over, but for His mother, grief continues. She holds His body in her arms.

Mary witnesses the burial of Jesus
Reading: Luke 23: 50-56.
The body of Jesus is laid in the tomb. The most tragic day in history ends, Mary alone in sorrow, awaiting the Resurrection

From Marians of the Immaculate Conception Website
Posted by Julie Cragon at 4:18 PM No comments: