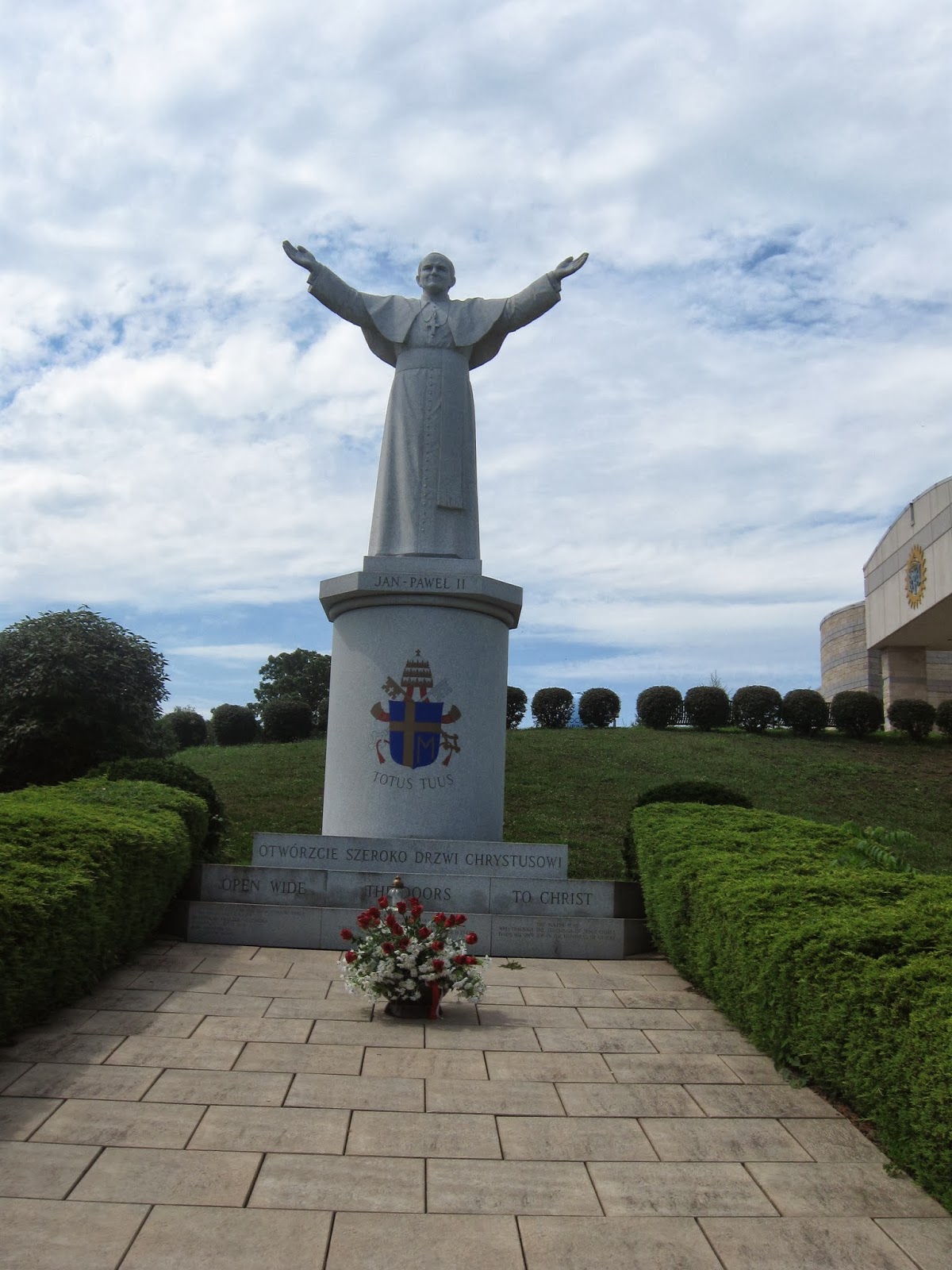 Sitting with my salesman yesterday, chit chatting about new product, could not have prepared me for the journey. I bought the new Pope Saint John Paul II holy cards and medals. April 27th will be here before we know it. How cool that I have actually shaken hands with this Saint! But today, I hear this story:

"We were to send the monstrance blessed by Pope John Paul II out to Pope John Paul II High School yesterday for use during Adoration. I called the principal to see that they had a Consecrated Eucharist to fit the Luna knowing that the priest and deacon were on the March for Life in Washington. Oops. They did not so I offered to bring all they needed for Adoration and they informed me that they had a visiting priest from Montreal who was going to say Mass for the students and have Exposition of the Sacrament. It was moving to walk into a gymnasium of young students, all kneeling before the Blessed Sacrament, all completely silent. After some time, the Monstrance was taken to the Chapel and the priest prayed the Mass. As the homily began, again, complete silence. Years earlier, after spending time doing mission work, this priest was told he had a brain tumor and had 3 months to live. He and many other priests and bishops traveled to Rome to meet with Pope John Paul II and in a crowded hallway in the Vatican, the priest's eyes met those of Pope John Paul II. He came to him and simply asked, "What can I do for you?" Pope John Paul II listened as the priest told his story and then asked to pray with him. With his hands on his head, they prayed for quite some time in the midst of the crowded hallway. Sweat poured from his face and he felt drained. (kind of like 'the touch of the hem of his cloak') The priest beside him asked if he was a Bishop or something. 'No, just a priest'. 'Well something's going on.'"
As the story goes, during his next doctor visit, this priest was completely clear of the tumor. Wow!

What a God-incidence that this visiting priest to our Diocese, who was helping at a local Parish because our priest had gone home to India for a visit, was called to say Mass at John Paul II High School, where the Monstrance, blessed by Pope John Paul II, was used for Exposition by a priest who had been cured by Christ through the institution of the hands and prayers of Pope John Paul II. I say, WOW! Miracle of Miracles! The principal got up after Mass and said, "I know that this looks like it's been planned. But it has not. I feel bad but I do not even know your name. Father, what is your name?" "Fr. Peter."

As Sister spoke, I was visualizing the Vatican, the hallway, the people, the priest and the Pope. I was journeying where I had journeyed before and yet led to places I had never been. Today, in our Gospel, Jesus told the Apostles to prepare a boat because the crowd was pressing in on Him, so many sick being brought to be cured, just to touch Him. Just a touch. A brief encounter. And, true Faith in the One who can heal.
Posted by Julie Cragon at 12:35 PM