Lay Down Our Lives

"The way we came to know love was that He laid down His life for us; so we ought to lay down our lives for our brothers." 1Jn 3:16

Last night's evening meditation including the above words from John. While contemplating this "we ought to," I seriously thought "but I'm not ready to give my life" and He responded, "you don't have to die" as in leave the world. I want you to die to self. I want you to little by little, bit by bit, every day, think of someone besides yourself, before yourself.
Ya know I've said it before and I'll say it again, when I realized that the world did not revolve around me, when I discovered that it all is just not about me, I was bummed. I like attention. I like to have the room laughing. I love to embellish a good story that makes everyone turn their heads. But somewhere along my journey, I found out, was told, that my life should be about loving and serving others, thus loving and serving Christ. Well, heck. And so I read, lay down my life and I hear, set aside yourself, your day, this minute and let it be about that kid who forgot to get her homework until it was time for bed. But, I'm tired and I've been to school. Let it be about that one who needs a ride when I have so much to do. But, I have to be elsewhere and yet what, who is more important than that one in need. The store is packed and in walks William and he says he needs a motorcycle or a car, a Buick LaSabre to be precise. But, we know, that what William really needs, what he comes in the door for, is our attention. Gracie goes to get him a coke and he always asks, "What else ya have?" "Peanut butter and crackers?" "No thanks." Just the coke...and the time spent standing in the midst of the store, of the people, of the normal, off the street.
This passage is difficult. We are asked to lay aside our own life for others-our time, our needs. Do we have to? Do we have to give? Give up? Can we ask for small projects, the less needy. the easy way? Really? For today, we ask for the grace to lay it down, to set ourselves aside...for our brothers.

Email ThisBlogThis!Share to TwitterShare to FacebookShare to Pinterest
Labels: 1John3 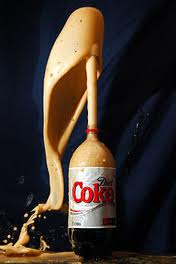 As I read the meditation for today from Jesus at My Side, I found myself reflecting on all the stories being shared of our new Pope Francis.

March 21
“Give and gifts will be given to you; a good measure,
packed together, shaken down, and overflowing, will be poured
into your lap. For the measure with which you measure will in
return be measured out to you."  Luke 6:38

I watched on TV as a  guy showed the world that mint menthos candies dropped down into a two-liter bottle of diet coke caused the coke to foam and to shoot out of the bottle high into the air. He explained that other sodas and other flavored menthos had been tried but did not have the same explosive effect.

Jesus wants us to do more than just give to one another. He wants us to put together just the right ingredients so that His gifts have an overflowing effect. He wants us to fill our hearts with His love and His teachings so that every day gifts are overflowing through us to others. It doesn’t take much for an explosive effect. One good measure.

Email ThisBlogThis!Share to TwitterShare to FacebookShare to Pinterest
Labels: Jesus at My Side, Luke 6:38, Menthos in Coke, Pope Francis

I wanted to post this story from the Magnificat last month, but forgot. Then, it was repeated at the retreat I went to and I thought it was a sure sign to post, but forgot. As I sat yesterday, moved to tears over the election of our new Pope Francis and all the wonderful news coverage and interviews, I thought I would post something today about St. Francis. This morning, before my mind started the day, I remembered this story and so it goes...

"When I was growing up in Russia, my father was a diplomat. One time he and my mother gave a big, fancy tea party at our home for several hundred ambassadors and dignitaries. We were in the middle of having formal tea, with everyone using nice china and so forth. I was about nine years old at the time, and I was allowed to be there, all dressed up and carrying little cakes and being polite. Suddenly, the butler opened the door and announced to my father, 'Christ is at the door.' Well, the French ambassador's wife dropped her expensive cup on the rug. She was not used to such interruptions!
Father excused himself, mother excused herself and off they went. And whom did they welcome? A hobo who had come to the door begging. And what did they do? My mother and father served him themselves, even though we had fourteen servants in the house. My mother laid out the best linen, the most expensive silver and our best china and so forth, and she served a hobo. My father did likewise. I saw all of this and I wanted to serve the hobo too, but mother said, 'Oh no. You were not obedient last week, you cannot serve Christ unless you are obedient.' So, in my little mind, to serve the poor was a great honor and a great joy.
Now that's Christianity. You don't have to have catechism lessons when you see that sort of thing. That was how my parents treated the poor, so that was what my brother and I learned growing up in that kind of household, thanks be to God.
Of course, I was like any other kid too. I would say, 'Well, do we live in a monastery or something like that?' My parents would say, 'No. We live in a family, of which Christ is the head.' So in the end, it all seemed quite natural to me to serve the poor. Christ was in the poor and we must serve him."
Servant of God Catherine de Hueck Doherty

I believe, from all I have seen and heard, that like St. Francis and this family, Pope Francis sees Christ in the poor and serves. We all in some way, whether spiritually, mentally or physically, whether we know it or not, are among the poor. We are all starving for something more. We live in this family and we are hungry. Let us serve one another.

Posted by Julie Cragon at 11:23 AM No comments: 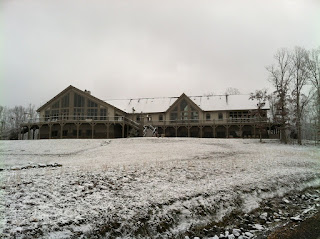 There's nothing like handing down great information received from a retreat. This past weekend I spent the day at the Bethany Retreat  of the Nashville Dominicans in Dickson, TN . They hosted a retreat for past alumnae of St. Cecilia Academy .  It was wonderful to share a day of faith with those I went to High School with and those younger and older. We shared memories and changes and just enjoyed the time with the sisters in their incredible, new Retreat House. We went to Mass, had time for Reconciliation and meditation, listened to conferences by Sr. Mary Angela, shared breakfast and lunch (all homemade by the Sisters, yum) and prayed the rosary together before returning to the reality of our homes. The snow fell the entire day. It was beautiful needless to say.
Many great reflections were shared over the course of the day about spending time with God and having a personal relationship with Him, the importance of our faith informing our lives, being reflected in our actions and in our homes. The stories were shared from Scripture of Jesus with the woman at the well and with the blind man and many others whom Jesus met face to face. Ya see, "Jesus wants us one on One". He wants us to come to Him face to face and to share our days and our nights, our fears and our joys, our good times and our bad times. He wants us to "look Him in the eyes" and to speak to Him. He stands at the door and knocks, but we notice there is no door knob. That door needs to be opened by us, from the inside. "He will not force Himself on us. He has devised a way to be with us in the Eucharist and as Catholics most of us have the opportunity to receive Him daily. He comes to us if we say yes and we are in communion with Him." One on One, with the only One who will never forsake us.
The very first assignment of the day was to read the Sermon on the Mount, Matt. 5 and for some reason I found a small bedroom, sat in the rocker with the cozy blanket I found in a closet and began to read Mark 5, the healing of the demonic. I take most things as Godincidence and quickly found this line from Jesus speaking directly to ME, "Go home to your family and announce to them all that the Lord in His pity has done for you." And His words after curing the daughter with the hemmorage in the same chapter, "Go in peace and be cured of your affliction. Do not be afraid just have faith."
One on One. He gives me all I need.

Posted by Julie Cragon at 11:49 AM No comments: