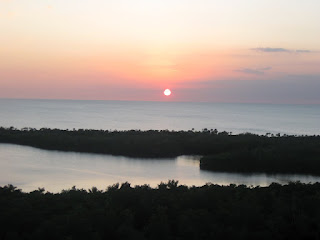 I've been in the best place ever this past week with 5 of my 6 children and my parents. Being in Naples, FL is close to being in Paradise. I've said it before and I'll say it again, it's awesome.
Living in Nashville all my life, I am used to being one of the few in a crowd to be Catholic. I am used to mission sized Churches and daily Mass in a Chapel. Now I can say that we have grown and during the week we pack the Chapel full during our two morning Masses but I have witnessed a different kind of full in Paradise.
As I ventured to St. William Church with my parents this past week, I was floored by the amount of Catholics who gather for morning Mass every single day. The Church was almost full and they have 3 Masses a day. Three Masses, over 400 people at each Mass and four Priests to celebrate. And, it's not the only show in town. They have two other Churches down the road a bit and they are actually tearing this one down after Easter to build a larger Church to better serve the flock.
"For God so loved the world that he gave his only Son, so that everyone who believes in him might not perish but might have eternal life."
These people believe and they are grateful. They give back. They participate in the One Body. They gather. Every. Single. Day. Hundreds of them. Here, in Paradise.
I am sure there are other places that pack them in like this and I know it is all a matter of perspective but I was truly moved. All I could think was "open the doors, here's all the people."
Posted by Julie Cragon at 8:22 AM