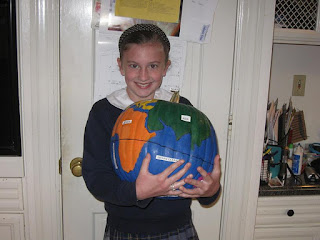 Our journey began 13 years ago when our oldest daughter was in 4th grade and was assigned to turn a standard 38" diameter pumpkin into a globe, labeling the continents and the oceans, the prime meridian and the equator, the north and south pole, and of course, Nashville, TN. We learned with the first one how important it was to take the tape measure with us and get as close to 38" and as round as possible. That year two pumpkins were purchased. We also learned the importance of not doing the project too early. In this case, the early bird would have a bad case of mold before the project returned home. But, it has to be done early enough for all the paint to dry well. The first half of the family had to purchase real pumpkins but now the children are allowed to use plastic. Not us! In this family it's all about tradition. Julia must have asked me six times as we worked together was this what I did for the other kids. "We can use a plastic pumpkin." "What did the others do?" "I can trace the continents while you paint." "Did you do that for everyone?" "Do you want to type out the labels?" "Did everyone else type them out?" And so on. So as our 6th and final pumpkin globe project went, it was purely done as it had been done in the past with a few lessons learned by the project manager.
All in all, it's fun to work with the kids on some of their projects and it's very rewarding seeing parents learn to let go of perfection with each child that comes along. That first and second and third globe, I wiped around the edges of continents making sure the kids stayed inside the lines. I balanced continents and oceans and made perfect lines for the equator and prime meridian. But as time passed, I realized that the pumpkin globe was not about the paint or the lines. The pumpkin globe not only taught Julia about our continent, even our own city and state, in relation to other continents, but it taught her a little something about our family and the importance of traditions and the importance of learning from previous mistakes and the importance of change and of difference. She obviously looks up to her brothers and her sisters and wants to be like them in many ways. I like that. I like that she gets it. I like that she knows she has choices but may still want to do what was done before. I like that she understands a little about family traditions. I like working with her. And, I have to admit, I like that this was our final pumpkin globe.
Posted by Julie Cragon at 10:52 AM