Feast of Our Lady of Lourdes 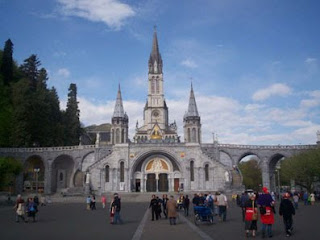 On June 25, 1985, I stood on top of the Basilica in Lourdes, France as thousands of people prayed and sang together, each in their own language. The rosary was prayed in about six different languages. Everyone raised their torches during certain parts. Small children went by in wheelchairs and strollers, as well as the young and the old. The number of volunteers was unreal, especially girls no older than me. Somehow, standing on top of the Basilica, watching the amazing faith of all those thousands of people, changed me. I could never explain how or why, but I was one of “those who are present as eyewitnesses of one of those rare but terribly real occurrences in which the omnipotence of God strikes through the shadows of time and space and bind up and heal the broken bodies of men.” Catholic Weekly January 1958

I was one of those present when the power of God shines forth where His Mother is honored and venerated. I was strengthened in faith, proud to be Catholic and to this day strive to follow the messages of prayer, repentance and fasting.

From my website: juliecragon.com
Posted by Julie Cragon at 4:35 PM