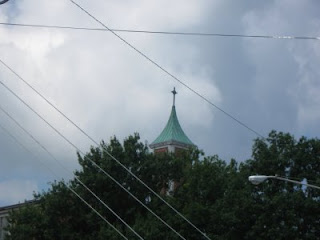 As my children head out to the neighborhood to play, I can't help but remember how great it was growing up in this neighborhood. I know God puts us in the places He wants us to be but I also know we have to be open to where He leads. We have been led back to the comfortable place where it all began for me - the lessons, the faith and the friendships. As so it goes...
Early lessons of faith and values taught by my parents were duly noted but dodged. Stored but ignored so to speak. Along with Vatican II, the sixties brought us a new neighborhood which for me meant a whole new world of possibilities. As Latin became English and altar rails were removed to welcome the flock more fully to the table, houses in our neighborhood were being completed and families were moving in weekly. As Pope John XXIII had opened the doors of the Vatican to other religions, I was knocking on doors meeting new families as soon as the moving vans rolled away. In a family of eight, soon to be ten, I took it upon myself to scout out new members of the hood and report back to my tribe. Open wide the doors became my motto also and I felt comfortable anywhere I landed.
The hood was my home. "Hello my name is Julie Dortch and our family lives over on Vaughns Gap and I'd like to welcome you to the neighborhood." That was my line. I learned. I practiced. I delivered. Although I couldn't separate people as religions but as possibilities of friendships or clients or attention, most of the families in our area seemed to be either Catholic or Jewish. From almost anywhere in the hood, we could see the steeple of the new Catholic Church and not too many years after we moved in, the Jewish Community Center was built on the back side of the Church property with a stretch of land and trees in between. A huge swimming pool and tennis courts brought together the Old and New Testament kids without politics. We became a community before "communities" were in and the area was soon referred to as Vatican Valley.
Vatican Valley became my comfortable place where I sought opportunities and learned from mistakes and received faith to carry me through life. This same hood is now a place for my children to live and to learn and to pass on.
We can still hear the church bells and despite the many added electrical wires, we can still see the steeple from our house. We belong to the Jewish Community Center as do many of the families in the hood, Catholic, Jewish or any other religion. We are fortunate to be in this place where all are welcome and some of the old remains with the new.
Posted by Julie Cragon at 10:47 AM