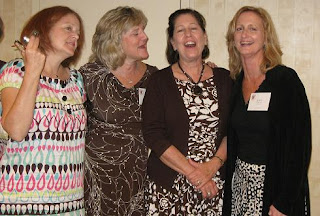 The St. Cecilia Alumnae Luncheon honored several classes this past week including my sister's Class of 1974. I was lucky enough to capture this picture of the four girls I shadowed most of my eight grade year. And the story goes...

Although we were four years apart, my sister and her friends allowed me to hang around them. I guess since she was my ride to basketball and football games and anywhere else I wanted to go without parents, I was just there. I was included and there was really no better feeling in the world than to be a part of an older crowd. I loved to watch them roll their hair with empty frozen orange juice cans and sneak smokes out the bedroom window. I loved that I knew the inside jokes about hiding extra clothes in bushes and making cokes and sunflower seeds and boys they worked with at Opryland. Even the simplest things they did seemed really big. Jeanne seemed to know everybody and it wasn't long before most of her friends knew me. It also wasn't long before her friend, John Dwyer, nicknamed me Shadow.

Near the end of an awesome summer, before leaving for her first year of college, Jeanne gave me a bright red cotton jersey for my birthday. She practically ripped it out of my hands to show me the back. A large white number twenty, which was my new number as she passed on her place on the SCA basketball team, and above that the name Shadow. It was a jersey I wore until the name and the number wore off. It was a name I answered to proudly and it was the feeling of being comfortable and being included that I would never forget.

In the shadow of His wings, we find a comfortable place to be with God in safety. He looms over us, engulfs us and satisfies us. He shelters us and protects us. We are happy under His careful watch. He stays close enough to cast a shadow and to be our help.